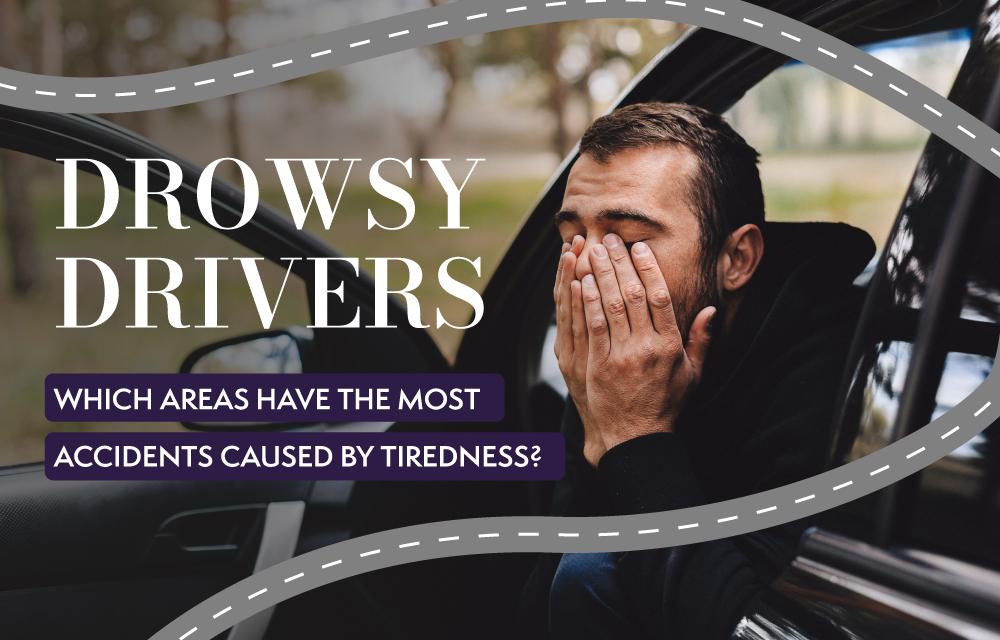 Which areas have the most accidents caused by tiredness?

We all know that drunk and distracted drivers can pose a danger to themselves and other road users, but driving when you’d rather be tucked up in bed surrounded by pillows is an often-overlooked risk even though it can be just as dangerous.

Driving tired can seriously affect your motoring skills, from slowing your reaction times to making mistakes like forgetting to check your mirrors while changing lanes.

But which areas in the UK have the drowsiest drivers? We dived into the latest government data to find out.

The areas with the most drowsy driving accidents

Many drivers find it difficult to judge how tired they are and signs of fatigue are hard to spot as they vary from person to person. Nobody knows this more than the residents of Oxfordshire as they have the highest proportion of accidents caused by tired drivers, at just under six per 100,000 people in 2020.

Sometimes even roads can make drivers drowsy, especially on what feels like long empty and featureless motorways with few interruptions and no stimulation. Drivers in Wiltshire know this all too well as they take second place with 4.36 accidents caused by tiredness per 100,000 people.

Accidents involving fatigued drivers often occur between midnight and 6 AM and in the late afternoon when drivers are naturally sleepier. Motorists in Kent should take note of this, as they rank third with just over four accidents per 100,000 people attributed to drowsiness in 2020.

The areas with the least drowsy driving accidents

One of the best things to do if you’re feeling drowsy on the road is to pull over in a safe place and take a 20-minute nap to keep you alert. Leicestershire takes the top spot as the area with the fewest drowsy drivers, at just 0.14 accidents per 100,000 people caused by tired drivers in 2020.

If you’re getting sleepy behind the wheel, it's best to avoid relying on quick fixes like caffeine, as your body will eventually override your brain’s attempts to stay awake. Liverpool takes second place for the fewest sleepy motorists with only 0.20 accidents attributed to tired drivers per 100,000 people.

Research has shown that driving for more than 2 hours continuously makes motorists less able to concentrate and slower to react to hazards, so make sure you take regular breaks to combat fatigue. The residents of Wandsworth are some of the least fatigued drivers, with 0.30 accidents per 100,000 people caused by tiredness.

The areas with the biggest average increase in drowsy drivrs

Lack of sleep, or disturbed sleep is the leading cause of drowsy driving, which has increased by a whopping 1,085% in Aberdeen since 2015 giving it the highest average increase. The city had the highest rate of drowsy driving in two of the years we looked at, peaking in 2018 with 48 per 100,000.

Modern vehicles are usually quiet and comfortable for motorists to make for a more relaxed drive, which can, unfortunately, make drivers drowsy. This could account for the increase in accidents caused by sleepy drivers in Somerset with the county seeing a 769% increase in accidents involving tired drivers since 2015. The accident rate also rose sharply between 2016 and 2017, from 0.18 to 5.14 per 100,000 people.

Up next is the county of Wiltshire with an increase of nearly 600% over the last five years. The county has some of the highest proportional rates in each year we looked at, peaking in 2015 with over 10 per 100,000 before dropping to 0.40 in 2016.

The areas with the biggest decrease in drowsy drivers

The best way to prevent drowsy driving is to avoid driving at all if you’re tired and motorists in Newcastle know this all too well as the county has seen the most significant decrease in accidents caused by tired drivers, with rates dropping by 41% since 2015.

Making sure to plan ahead and getting at least 7-8 hours of sleep, or taking a short nap before a journey is key to avoiding driving fatigue. Drivers in Leeds are some of the most alert in the country, with accidents caused by tiredness in the city dropping by 35% over the last five years.

Our guide to a better night's sleep

Knowing how to give yourself the best chance of a proper night’s sleep is the best way of avoiding tiredness on the road. With this in mind here are some tips on some of the best ways to improve the quality of your sleep.

One of the best ways to improve your sleep is to set a regular sleep schedule and stick to it. By following this schedule every night, your body clock will adjust to it, making it much easier to get a deep and undisturbed sleep.

Blue light is given off from our phone screens, TVs, and computers which can throw off our sleep cycles and disturb our sleep. Try to cut out screen time for at least an hour before bed, or even leave your electronics outside the bedroom for more restful sleep.

Stimulants are extremely unhelpful when you’re trying to get a good night’s sleep. They keep the mind and body alert when all you want to do is drift off. Alcohol should also be avoided as although it may help you fall asleep, it can cause disturbances during sleep.

4. Avoid sleeping during the day

Keeping awake during the day is very important for falling asleep at night, as the sleepier you are the faster you’ll fall asleep. If you do feel the urge to nap, try to keep it under 30 minutes as any longer could disturb your sleep later on.

5. Use the best pillow for you

Supporting your head and neck is very important for a good night’s sleep, so you should choose the right pillow based on your sleeping position. There are also pillows that help with conditions that make a good night’s rest difficult like anti-snore pillows.

You should also consider changing your pillows every one to two years, as after about two years your pillow won’t be as supportive or comfortable as it was brand-new which could seriously affect the quality of your sleep.

We wanted to find out the areas in the UK with the highest rates of accidents caused by fatigue. To do this we used data from the Department for Transport's 2022 accidents by contributory factor, local authority and English region report.
Population figures used to calculate rates per 100,000 were taken from the ONS.